As the world remembers the 75th anniversary of the D-Day landings which liberated Europe from the scourge of Nazism, Armed Forces Day is a chance to show your support and pride for the men and women who make up our Armed Forces community: from currently serving troops to Service families, veterans of past conflicts and our amazing cadets who never fail to honour them.

There are many ways for people, communities and organisations across the country to show their support and get involved, from attending an event or joining us online to throwing a party or local event.

The Ministry of Defence have requested that flags are flown to celebrate the start of Armed Forces Week and as ever Salford will be proudly joining the nation in tribute to the country’s armed forces community.

A small ceremony will be taking place on the front steps of Swinton Town Hall, Chorley Road, Swinton, M27 5FJ from 10.30am on Monday 24th June 2019 to honour our armed forces community.

The Ceremonial Mayor of Salford, Councillor Charlie McIntyre and the City Mayor Paul Dennett will be joined by the Lord Lieutenant Mr Warren J. Smith and the Lancashire Fusiliers for the ceremony which runs from 10.30am to 11am. The Salford in Harmony choir will also be performing and the event is open to everyone.

At the rise of the ceremony light refreshments will be available in the Salford Suite within the Civic Centre. 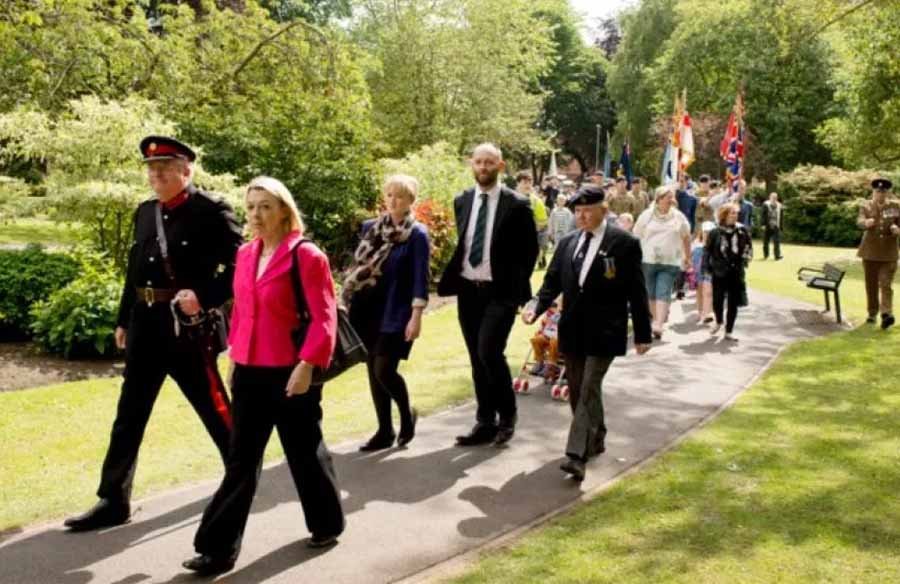 Once more the much loved Winton Festival will again be supporting Salford’s Armed Forces Day on Saturday 29 June Salford’s military and community parade will travel from Duke’s Drive, Monton, along Parrin Lane to Winton Park, starting at 10.30am. Please allow extra time for your journey if travelling in this area as the parade passes through.

The festival is open from 11 am to 4pm. and includes fun for all the family with entertainment on stage and mini fairground rides for children.

The Salford Angels WI will be serving refreshments and home-made cake in the tea tent and the event is being supported by 236 Squadron, Lancashire Fusiliers, the Sea and Air Cadets, Brownies and Rainbows, Greater Manchester Police, Greater Manchester Fire & Rescue Service and Booths Charities

Salford's finest young Cadets from all local detachments will be proudly marching alongside their seniors, veterans and their families in honour of the brave men and women of our services.

Winton Festival is proud to support Armed Forces Day with a number of fun activities planned. Forming part of the event will be a Parade; starting from Dukes Drive Car Park, off Parrin Lane, Monton, Eccles @ 10.30am, concluding at Winton Park, Dover Street, Winton.

“Armed Forces Week is a chance to show our appreciation and support for all the armed forces community – those currently serving, veterans, reservists and cadets and their families."

“Their dedication and sacrifice keeps us all safe and protects our peace and way of life in troubled times. We owe them all an incredible debt of gratitude as well as our respect and admiration."


Go to articles What's On