Simon Williams, author, poet, charity fundraiser, radio DJ and now a songwriter has turned his talents to penning six songs on a new CD, "Winds of Salford" and it has to be said he talks and writes in the voice of the streets he grew up in and still lives in.

We met up with him and he told us how it came about:

"The covid lockdown affected me badly in quite a few ways, I was due to perform some of my poetry at the 40th Anniversary of St Anthony's Heritage centre in Trafford Park, I was invited by Vincent Sheedy and Paul Frost who had heard my stuff and were presumably impressed, sadly that gig was cancelled along with the Wigan Diggers Festival this year which I was really looking forward to playing.

"I decided to write some songs and sent them off to Paul and Vincent who sprinkled their musical, magic on it and I am delighted with the finished product, and the strangest thing is, I have never met them and yet we somehow click".

As can be imagined coming from a man who has a passion for his place of birth. the songs are a love song to growing up, working, falling in love, passion, heartbreak and memories of life in Salford and can't be faulted.

There is one standout track for me, "Homeless" a collaboration with Vincent and Paul which pulls no punches and was almost used in a television documentary this year, once again the covid curse struck.

So ten tracks in total which provides a nice blend of Simon, Vincent and Paul's lyrics and an easy listening musical backup, hats doffed to everybody concerned.

Simon has had an initial 100 copies run off and has so far sold 70 copies, on it's first day of release, which is some going and if you would like to purchase a copy.

The cost of the CD is £5. and if Simon says so himself, it's ideal for a Christmas stocking filler, or for exiled Salfordians, missing 'The Winds of Salford'.

You can buy the CD, at 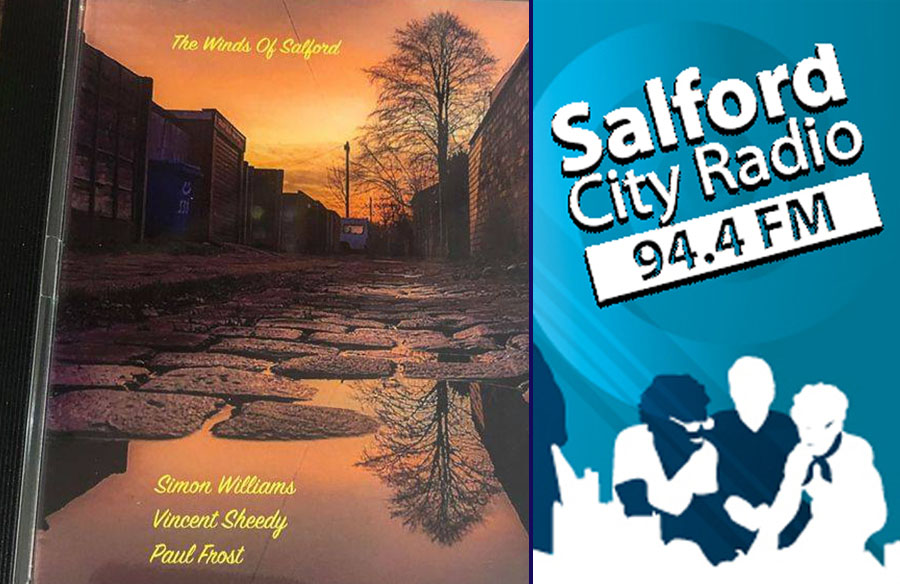 All profits of the CD, will go to our local radio station Salford City Radio 97.4FM, a community radio station that both Simon and salford.media are huge supporters of.

However here at salford.media we have a copy of Winds Of Salford which can be yours by answering this simple question:

Which radio station will not give Karl and Tony their own show?

Send your answer to SOL comments Facebook page and the first one one drawn out of our fabled lucky hat will be the winner, Winner will be announced on Saturday at 11 am.