Over the past few years there have been numerous reports from local park 'friends groups' of wheelie bins being set alight, their molten mess left behind to scar the landscape. It is not only a problem here but all across the country and the reason behind it is rather worrying.

Parr Fold Park in Walkden has been one such area inflicted with this latest idiocy, with the latest incident happening just last Friday evening, however, they are not alone as Lower Broughton has also seen bins set alight over the weekend to. 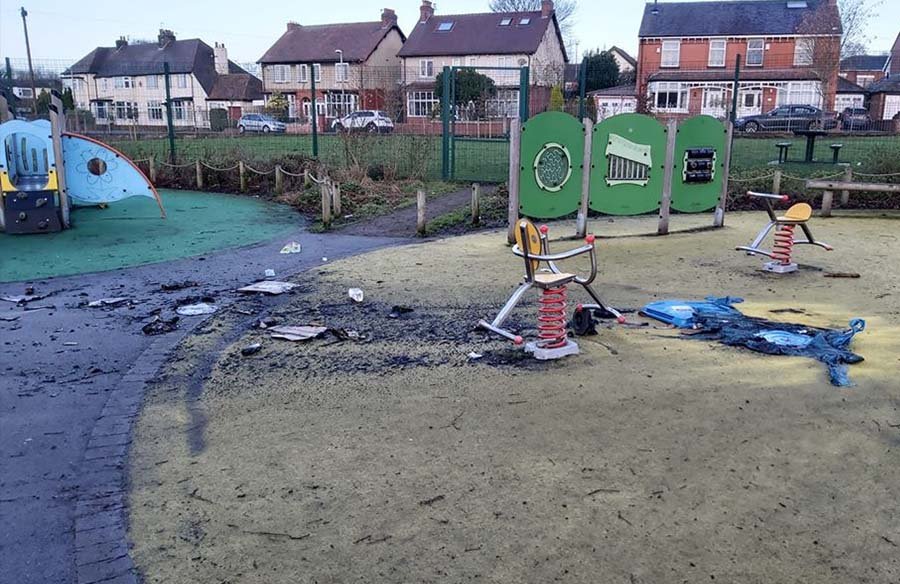 Part of a children's playground at Parr Fold park in was damaged as a wheelie bin was set alight causing damage to the ground.

This is not the first time that the park has suffered with this problem as it has a recurring issue that still remains a problem for the area.

In the past there were problems in the city with glue sniffing, then sniffing gas and petrol became a huge problem - but now it has come apparent that certain dyes used in the manufacture of the bins can apparently get you 'wasted' and so youngsters unaware of the potential harmful side-effects are breathing in what the toxic fumes to get high.

It should be noted that not all bin fires are caused in this way as some are simply down to arson but the craze has become more popular amongst some age groups and the harmful effects this stupidity can have on the lungs and other bodily organs are immense.

It has become the free and easily available drug of choice for some as young as just 11-years-old, the health and safety implications are terrible. It is only a matter of time before someone seriously harms themselves or even worse, dies.

Wheelie bins are made from high density polyethylene - composed of double-bonded carbon and hydrogen molecules.

Burning an empty one releases carbon monoxide and carbon dioxide.

These deadly gases starve the brain of oxygen, giving a headache-heavy short high in a similar effect to asphyxiation. Not only that but the mess left behind can be damaging not only to the environment but also to those who are left to clean it up.

Today Salford City Mayor, Paul Dennett hit out at what he says are those 'Blighting Our Community' and we could not agree with him more.

Over the weekend a number of residents in Lower Broughton had their wheelie bins stolen and set alight and the Mayor was quick to slam those responsible for it:

"Really disappointed to see black bins taken from residents properties in Lower Broughton yesterday and set on fire, leaving debris over our green spaces, leaving residents without a black bin and blighting our communities.

"Saddening & disappointing. I’ve asked for it to be cleared."

Written by KARL on February 11