With our social media pages being flooded on a daily basis with images of bottles of hand sanitiser and other household necessities being sold by some unscrupulous local businesses and vastly inflated prices, City Mayor Paul Dennett has this evening warned those shops looking to exploit people on their time of need to think again.

In a statement issued this evening (20th March) Paul said:

"In light of evidence that 'price gouging' is occurring amongst some Salford businesses, the City Council would like to make clear that profiting from public desperation during the Coronavirus /Covid-19 pandemic is completely unacceptable and we are working alongside the Competition and Markets Authority and Government to document known cases."

salford.media has been shown evidence of one local business having hiked the price of a 99p bottle of hand sanitser to ten times its value, charging an extortionate £9.99, meanwhile, another store in Eccles was reportedly selling the same product for £6.99.

We have had reports of prices being hiked on products in multiple shops across the city including a receipt from one Pharmacy which shows them clearly selling boxes of 32 Solpadeine Plus tablets for £9.99 which is almost twice the price of its regular RRP.

Salford Council is now asking Salfordian's to help stamp this 'Price Gouging' out by reporting incidents and sending evidence to them via either general.enquiries@cma.gov.uk or trading.standards@salford.gov.uk, putting 'Excess Pricing' as the emails subject. 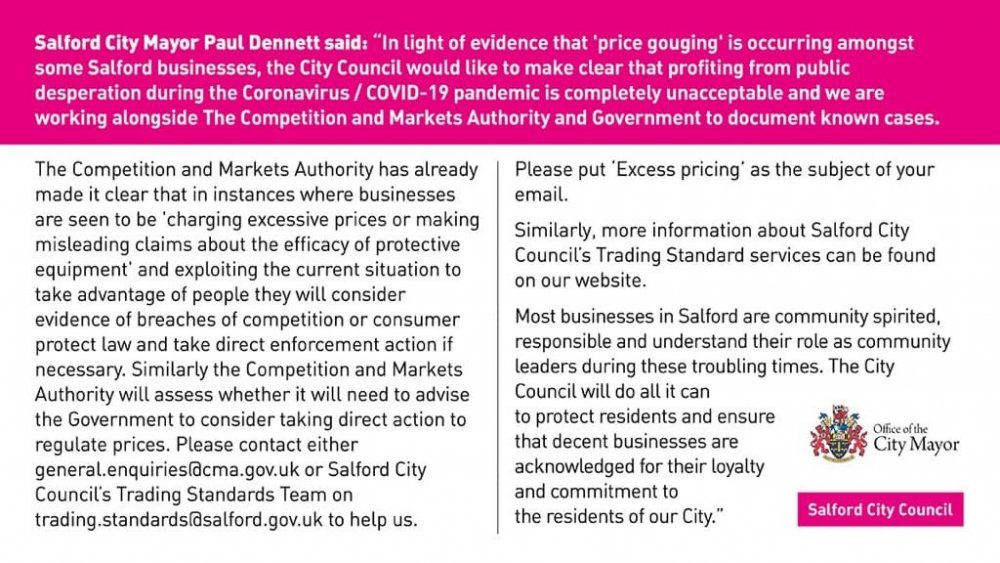 It is completely and utterly disgusting that a small number of local retailers consider it to be acceptable to rake in huge profits at the expense, misery and plight of the people of Salford. These retailers are taking advantage of a scared public who are desperate to secure the medicines they need due to shelves being stripped of them by panic buyers.

We ask that all of those who witness such price hiking speak with their feet in future and take their custom elsewhere.

Fortunately the majority of local businesses in Salford have been standing in solidarity with the people at this time of unprecedented crisis, keeping their prices the same and doing their best to maintain stock for those who are finding it hard to fill their shelves due to the selfishness of panic buyers who have stripped supermarkets bare over the past week.

As with everything in Salford, it always seems to be a minority that make things worse for the majority.

Salford Council has also been busy galvanising support from local community members, businesses and groups as it responds to what is essentially a fight against an invisible enemy that had declared war on each and every member of our community, we all need to do our bit to ensure that we bring this to an end as quickly as possible and with as few deaths as possible.

Earlier in the week a support group on Facebook was started by local councillors in partnership with the NHS, Salford CVS and Salford Council, and hundreds of local volunteers with the aim of aiding as many as possible of those who need help and assistance as we battle through what is undoubtedly the worst health crisis in modern times.

A form to volunteer is available via the Salford CVS website here: https://www.salfordcvs.co.uk/emergency-response-volunteer-registration-form