The drugs were transported via fake businesses and lockups located in Manchester, Bolton and Warrington.

They even dug a secret underground bunker formed of buried storage containers on a farm in North Wales to grow cannabis within.

Between July 2017 and November 2017 seven deliveries of cannabis were imported to the UK via Spain through Port of Dover.

Drugs were concealed in packages labelled as oven filters. They purported to be destined for a kitchen firm But the business didn’t exist and the address associated with it actually referred to a yard containing lock-up units behind a convenience store on Newton Road, Lowton, Warrington.

Between September 2017 and August 2018 six further deliveries arrived through Dover with drugs concealed in pallets of lettuce and peppers. This tranche was destined for a cold storage company in North Manchester.

Officers stopped the sixth delivery in Dover on 12 August 2018 and uncovered 177kg of cannabis with a street value of more than £1.5 million.

Police raided a unit at the site in Lowton which was owned by Tony Cadman.

Police executed a warrant at the lockup and found a stolen Mercedes which contained £20,000 worth of cannabis. 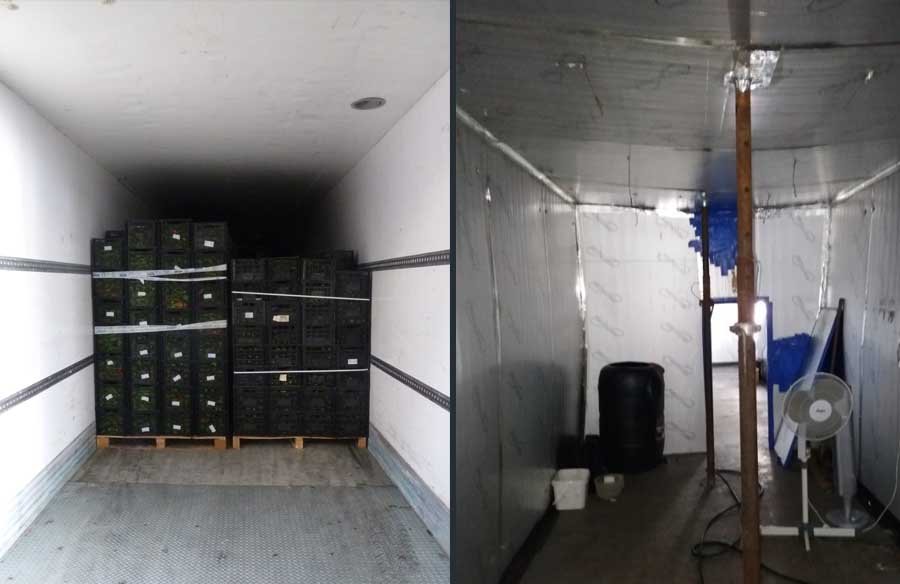 Harley admitted that the underground bunker was built at the farm three years previously but that production there ceased shortly afterwards as it was too wet to grow cannabis.

Drugs imported using the concealment in the cooker filters to the lock up in Lowton totalled £6,600,000.

The total value of drugs believed to have been imported by the organised crime group if sold on the street is £15,450,000.

“Thanks to the excellent work of our officers and colleagues on partner forces and agencies, we have managed to bring down a vast drugs network.

“These men were responsible for attempting to import enormous amounts of cannabis into the UK; the sale of which would have been used to further criminal enterprise.

“They even went to the expense of creating a large underground complex intended for cultivating the drug.

“However the exceptional detective work of our investigation team was able to identify and dismantle this organised crime group.

“Consignments packaged among lettuces or kitchen equipment were intercepted and prevented from finding their way onto our streets.

“Drugs blight communities and ruin lives. Their sale is used to further the activities of organised criminal gangs who have no regard for the safety of the public or the rule of law.

“Today the law caught up with these would-be kingpins and they have a long time behind bars to consider their foolishness.”

Today (Friday 19 July 2019) at Manchester Crown Court, Crown Square the following were sentenced for their roles in the conspiracy.

Scott Byrne (03/01/1987) of Sandlewood, Westhoughton was found guilty of importing cannabis and sentenced to 13 years in prison.

Tony Cadman (11/09/1986) of Alder Avenue, Widnes was found guilty of importing cannabis and sentenced to 12 years in prison.

Wesley Kinsella (30/09/1987) of Heatherfield, Bolton pleaded guilty to importing cannabis and was sentenced to nine years in prison.

Lee Jackson (08/01/1981) of Bradmoor Road, Wirral, pleaded guilty to importing cannabis and was sentenced to nine years and four months in prison.

Michael Moore (05/10/1988) of Bog Farm, Eryrys, Mold pleaded guilty to production of cannabis on an industrial scale and was sentenced to two years and nine months in prison.

Michael Harley (29/04/1984) of Bog Farm, Eryrys, Mold pleaded guilty to production of cannabis on an industrial scale and was sentenced to two years and nine months in prison.