I'M A SALFORDIAN GET ME IN THERE, CORRIES ANDY WHYMENT DODGES PIGEONS AND GETS HIS HANDS COVERED IN OFFAL AS HE DEBUTS IN THE ITV JUNGLE

Corries Kirky, better known as much loved actor Andrew Whyment, has entered the "I'm a Celebrity Get Me Out Of Here" jungle, this evening.

The Clifton born and bred actor made his Australian bush debut alongside former EastEnders actor Cliff 'Minty' Parisi as they were thrown right into the action, both having to compete in a Bush Tucker Trial to win stars which were then exchanged for portions of food for their fellow camp mates.

During the trial, Andy managed to get his hands on five stars for camp and Cliff followed up with a further three to bring the final tally to eight meals for the starved campers.

The twist in the tale was that after the trial, which saw the Whyment get his hands covered in offal and fish-guts, both newcomers were carted off to languish in  Jungle Jail after being put in the back of a prison wagon. 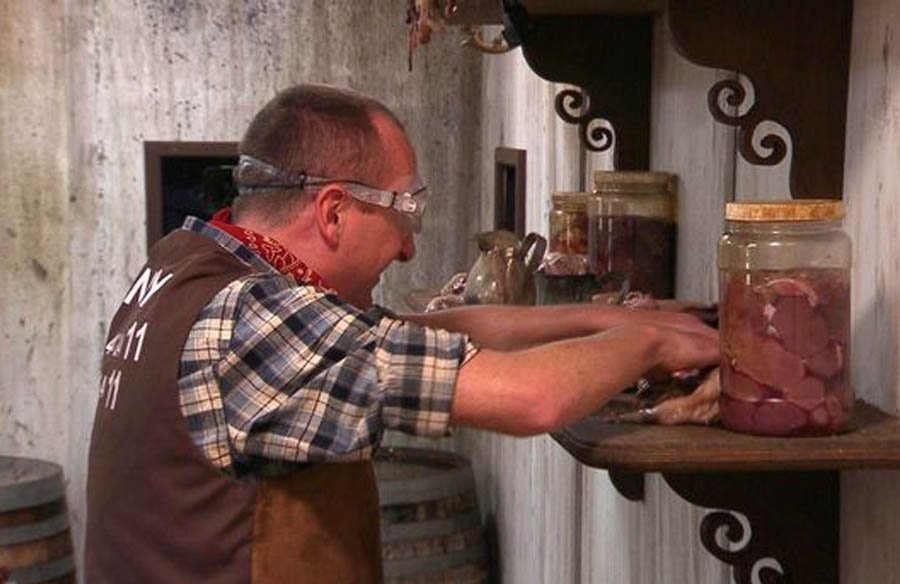 Fortunately their fellow camp mates felt sorry for them as they drew water bottle bags with their names on out of a sack in order to decide who should take them some much needed bush tucker. The sting being that the two who were chosen to deliver the grub, would end up behind bars themselves.

Whyment has been an instant hit with the fans and has already gained huge support from his fellow Salfordian's due to his hilarious sense of humour and down to earth Salford attitude to life. The lifelong Salford Red Devils fan was schooled at St Ambrose Barlow RC in Swinton and is no stranger to reality TV, having appeared as a contestant in Soapstar Superstar in 2006 and wowing the crowds with a rendition of Kings or Leon's 'Sex On Fire' during a tongue in cheek audition for the X-Factor in 2010 in the guise of his Coronation Street character Kirk Sutherland. He also partnered with dancer Vicky Ogden when he took part in the 2012 series of Dancing on Ice.

Before entering the Jungle Andy said,

"I have always been a massive fan of the show and when they asked me to do it, I said 'yes' immediately.

"It’s a once in a lifetime opportunity and it’s crazy to think I am now actually going! I am so excited."

Fellow housemate and Capital Radio DJ, Roman Kemp, was favourite to win earlier this this week but we suspect that is all about to change, the audience just love him.