Fire crews from Agecroft, Atherton, Broughton, Eccles, Gorton, Irlam, Manchester Central, Sale, Salford and Stretford were quickly on the scene at the five-storey derelict building as the fire quickly spread.

The alarm was raised just before 4:45am this morning (Sunday 1st Dec), as smoke and flames were seen billowing from the windows and roof of the historic grade-II listed building. 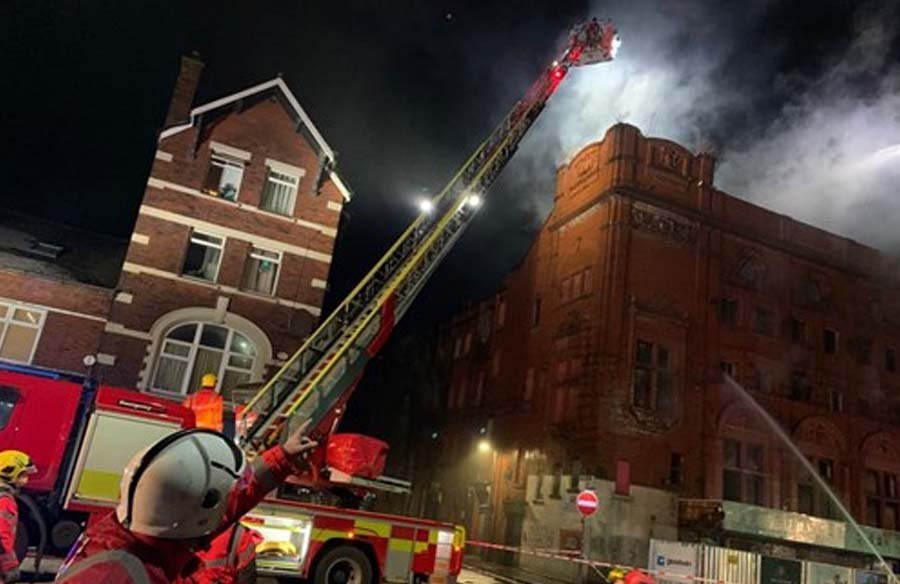 The theatre on Liverpool Road in Eccles, has been targeted by arsonists on a number of occasions in the past, and recently plans had been passed to turn the building into housing, despite a campaign to 'Save the Theatre' and restore it back to its former glory.

The 2,500 seat grade II-listed building which was built in 1899 as the Lyceum Theatre, has not been used as a theatre since 1932, it did serve as a Bingo Hall for a time but has since remained derelict and over time the building was allowed to decay.

It was set to be redeveloped into roughly 80 flats by developer Foregate, with the facade of the building to be maintained and incorporated into the new design. The plans were approved by Salford City Council at a meeting in February of this year.

The building is now nothing more than an empty brick shell as everything within the interior has reportedly been completely destroyed and its the roof has fully collapsed into the main structure, it's beautiful façade is still intact and the developer is still determined that it be integral to their plans for the building.

"Their actions have ensured the structure of this iconic Grade II listed building remains intact and we are able to continue with our build programme without delay.

"Whilst the years of dereliction rendered the interior unsalvageable, retaining the original façade has always been integral to our redevelopment plans and we are delighted that we are able to proceed as planned in order to breathe new life into this historic building."

Sadly what was left of the grand staircases, floors and balconies have all bee destroyed, as yet another in a long line of the cities historic buildings is ravished by fire. However, it is good to know that this particular one still has a future and will remain a prominent landmark in the local area for years to come.

Local residents reported that the fire was well established and tearing through the building before firefighters arrived.

"It's not the first time the Crown has been on fire, I am surprised that it has not gone up in flames like this a long time ago.

"It's such a shame to see the old building be allowed to lapse into such a state."

“We have been fighting this fire for around two hours and though it is a large building and we have lots still to do we are making good progress.

“I want to praise the swift actions of firefighters who are operating in challenging conditions – temperatures are freezing and the ground is slippery underfoot. Nonetheless, we are on top of the incident.

“We continue to have to fight this fire from outside the building – the state of its disrepair and the fact it is still dark means it would be unsafe to enter.

“We will be here for some time to come but I want to reassure the public that the situation is under control.”

It is still not ascertained how the building came to be set alight as there were no mains connections for gas or electricity, it is understood that Arson has not been ruled out.

Salford Council have confirmed the building is safe from collapse and there is no risk to the public of falling masonry from buildings structure.

Road closures in the immediate vicinity remained in place until mid afternoon and the public were asked to help keep surrounding streets clear of traffic to allow emergency services vehicles and personnel swift and easy access to the scene.

The roads have now since reopened.

There was still quite a significant amount of smoke in the surrounding area so those living or working nearby were asked to keep windows and doors closed for the time being.