Salford Magistrates Court saw George appear there charged with being drunk and disorderly and police assault,  a fairly serious charge.

George gave his address as Park Place a short road off Cross Lane which was infamous for the number of lodging houses or "doss houses" there. 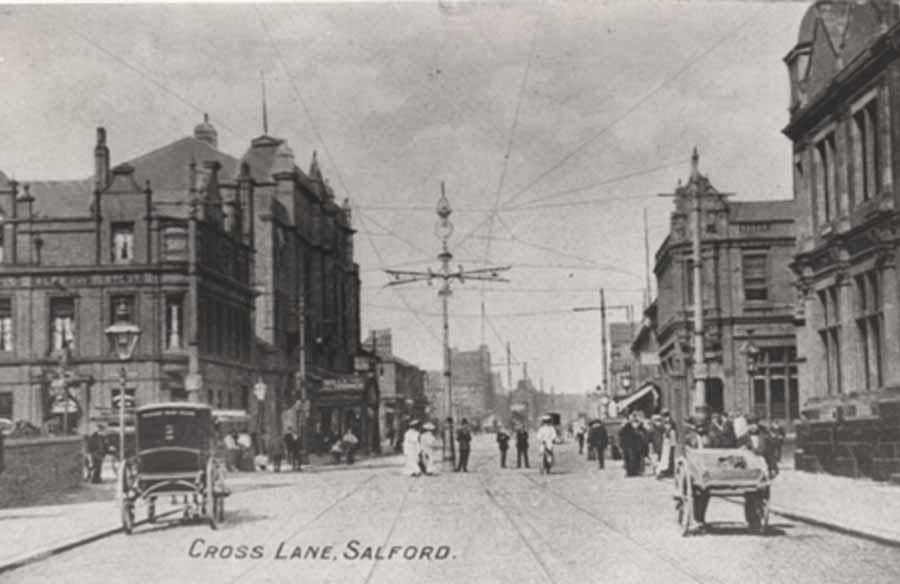 I have read that a man could get a "bed" for the night in a room shared with up to a dozen men for fourpence, if he was less fortunate he could pay twopence and sit in a cellar along with other men, also a rope was slung across the room from which men could flop against and try and get some sleep, hence the expression, "flop houses" I kid you not.

Back at the Magistrates Court P.C. Case told the court that he was on duty on Cross Lane on Saturday evening, Cross Lane at this time could "boast" of having some 18 public houses, two music halls and an army barracks which no doubt contributed to the lively and vibrant atmosphere there.

P.C. Case noticed a group of men blocking the footpath whilst watching a meeting of the Salvation Army, who were no doubt intent on saving these wretches from a like of drunkenness and debauchery, Bless them.

George Udall was spotted by the eagle-eyed policeman, leaning on a chemist shop window, reeking of ale and unsteady on his feet.

He was asked to "move on" no doubt in the politest terms used by the Salford Constabulary.

To use the local parlance, "this is when it all went wrong" and George was arrested and taken to Cross Lane Police Station, no doubt for a rest and a cup of tea.

The full story of the events of that night unfurled before the Magistrates Court as P.C. Case told the Magistrate that he asked George to "move along" and for his troubles was punched several times in the face and kicked about the body.

George took the stand and gave a totally different version of events.

"Was it not true that the Salvation Army Captain told me to go to the police station with you, like a gentleman"?

The Magistrate asked P.C. Case if this was true and, "Did George go with you like a gentleman"?

P.C. Case replied, "No he didn't act like a gentleman, more like a madman, punching and kicking me all the way to the police station"

Outraged by this slur on his character, George replied somewhat bizarrely.

"As a young Salvation Army soldier I will fight my own battle like a brave and true soldier with anyone and I will take my own part when there is no one in the world to stand up for me"!

I tell you if I was in that courtroom that day I would have stood up and applauded George for that speech a Clarence Darrow in the making.

Sadly things began to unravel for George when he was asked to give evidence on oath.

He told the court that he could not read or write because he used to play "wag" when he was a boy and never learnt how to.

However he sprang back into defence mode and told the court,

With a last roll of the dice and no doubt hoping for leniency, he told the court that he used to belong to the Salvation Army but had sadly fallen from grace and the reason he was there that night was in order to make a fresh start with God, until P.C. Case intervened.

The Magistrate must have been impressed with George's heartfelt plea and instead of sending him down, which is what usually happened if you struck a constable, he sentenced him to twelve months probation and warned him about his future conduct.

So did George regain his faith and change his wicked ways and end up flogging copies of the War Cry magazine to topers in the numerous pubs on Cross Lane? I somehow doubt it.