Today I paid a visit to the Crown Theatre, Liverpool Road, Eccles after diggers were seen on the site, levelling the ground and generally making good the area.

I spoke to the site manager, Simon from Goodwins who told me that the digger was doing, "enabling work" a posh term for getting the ground ready for construction work, which will start in the next few months, and new safety barriers are being erected around the site.

I have a long term fascination with this building and it's rich and varied history, so I would like to share a few anecdotes about the performers who have played here and incidents at the theatre.

The building opened in February 1899 and was called the Lyceum Theatre and it originally put on Shakespeare productions and high brow revues, sadly the people of Eccles were not too enamoured with this and wanted good old fashioned music hall revues. 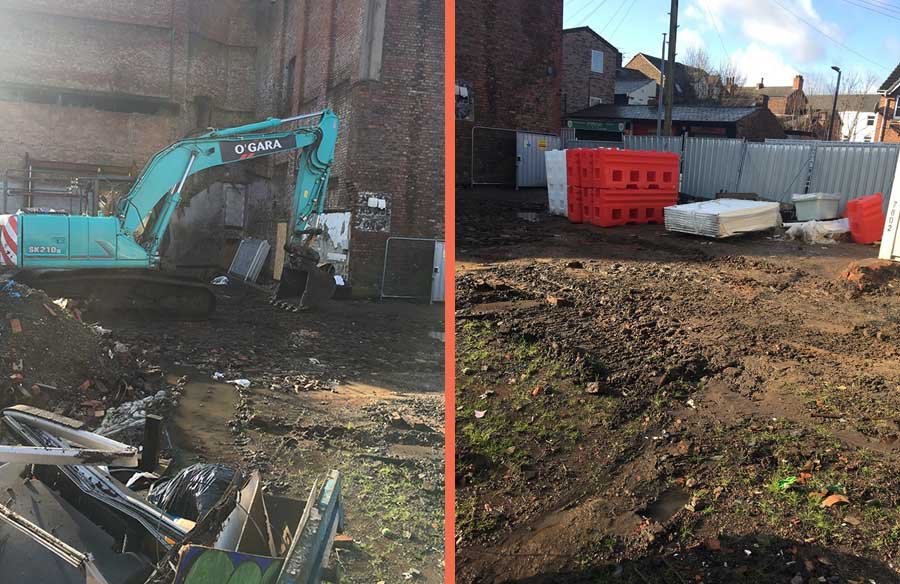 And so their wish was granted with top name artistes treading the boards here, including a young Charlie Chaplin in 1910, George Formby Senior and George Formby Junior, Frank Randle as one of the Bouncing Randles, trampoline artistes, Ted Ray, Linga Singh, Will Hay, Max Miller, Max Erard and countless others.

I came across some strange acts that performed here and I would like to share just a few with you.

In June 1900 a revue called, The "Klondyke Nugget" played here, a full Cowboys and Indians show complete with horses on stage, gunfights even a band called "The Alaska Brass band" even a shooting contest with local councillors taking part.

This revue was the work of Samuel S. F. Cody, no relation to Buffalo Bill, but he was an American who led an amazing life of his own.

He developed a man-lifting kite and sold the patent to the War Office in 1906, and in 1908 became the first man in Great Britain to build and fly his own plane in a sustained power flight and won £5,000 in a Round Britain air race in 1912, sadly he died when his plane crashed at Laffan Plains, Aldershot in August 1913.

A chap called Dr Walford Bodie appeared here in 1903 and he billed himself as being, "The World's Greatest Hypnotist, Electrician and Scientist" obviously a very modest man.

He claimed he could cure people with polio by giving them electric shocks with his "Royal Magnets" and on stage he allegedly cured two young boys of polio, James Bethell and Willie Davis, they arrived in wheelchairs and walked out of the Theatre.

Bodie led a fascinating life, he even introduced an electric chair into his act and would electrocute his female assistants, also hypnotising them so that they would sleep in a coffin in a shop window for several days, in Birmingham a deranged youth ran on stage and tried to kill him, to no avail.

In 1905 King Edward V11 was so impressed with his stage act in London that he visited him backstage to congratulate him!

He incurred the wrath of the medical profession with his use of the initials M.D, he said that they stood for Merry Devil not Medical Doctor and shrugged it off, however a large mob of medical students would turn up at his shows causing mayhem, pelting him with bricks and rotten fruit, causing him to flee the stage.

If you get the chance, look into Walford Bodie a truly remarkable man who could list Chaplin, Houdini, Harry Lauder. Marie Lloyd and many more as his friends.

Continuing with the bizarre a chap called Samson appeared here in 1921 and his act consisted of him performing feats of strength such as bending iron girders, catching a 200lb canonball fired from a cannon 20 feet away and the highlight of the act was to have a motor car drive over him on stage, Follow that!

If you think that was strange, consider, "Fred Ropers Midget Company" this consisted of a troupe of midgets who each did a novelty act, such as singing, dancing or juggling, he even put adverts in the Eccles Journal to let people know that would be arriving at Eccles Train Station and then taking afternoon tea in the Furnishing Department at Eccles Co-op Stores.

The Crown became a cinema in 1932 and carried on showing films until 1963 when it became a bingo hall, this too closed in the mid 1990s.

Finally no story is complete without a ghost in it, is there? spare a thought for Fred Mason a decorative painter who was killed  shortly before the grand opening when part of the scaffolding he was working on collapsed and he fell 45 feet to his death into the auditorium.

Obviously many,many more stories can be told about the Crown Theatre and I am certain you have your own, so feel free to share them with me.

Written by Tony Flynn on February 27