I don't think I have ever come across a proud Salfordian who has not visited Lark Hill Place at least once during their lifetime, my own first experience was during a school field trip back when I was much younger and those memories have endured over the years.

I have made return visits to the street many times, and the experience has never become any less magical than that first time I stepped onto its cobbles.

It has often been said that so much of our heritage has been lost over the years but LHP is still standing as a testament to a time gone by and a time that sadly fewer and fewer of us are still around to remember. 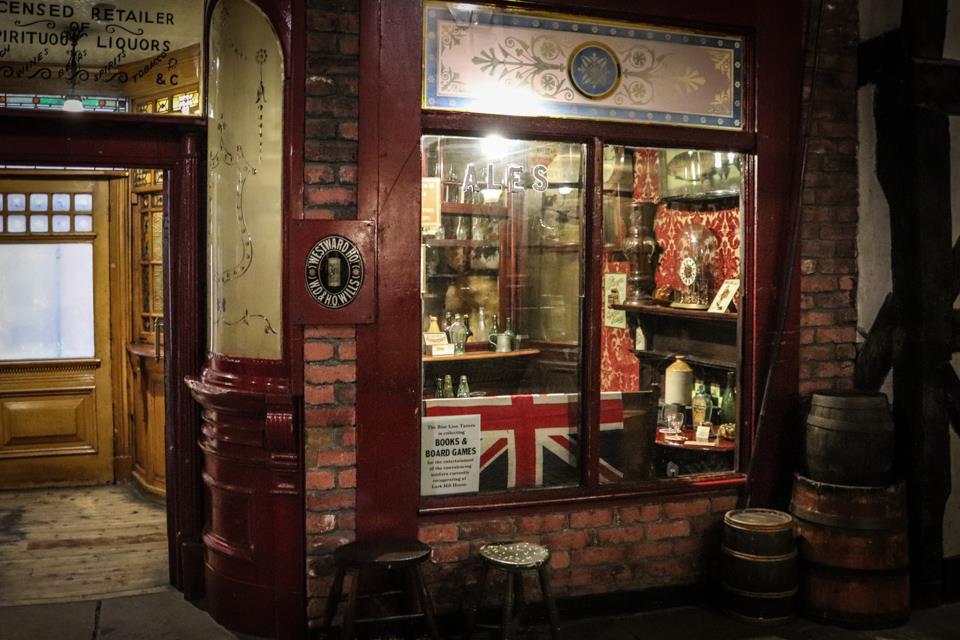 So when I was told that things were going to change I was a little apprehensive at first, as to me LHP is a local treasure that this City should never tinker with and protect at all costs.

My concerns, however, were unfounded, as for one year only the street will see a temporary redisplay of Lark Hill Place from 1898 to 1918 allowing the visitor to explore and immerse themselves in an era of great change not only within Salford but the world at large.

Lark Hill Place was originally created in 1957 when many shops and houses in central Salford were being demolished to make way for new developments. Many of the shop fronts that are in Lark Hill Place today were saved and restored. The interiors have been furnished and are full of authentic objects, recreating the way they were used in Victorian times.

The £32,000, Heritage Lottery Funded project tells the story of the residents and shopkeepers of Lark Hill Place as they endured during the years of the first great war, using both audio and visual elements to amazing effect.

The ambience is set at teatime on a winter's evening when the street gas lamps have just been lit. The sounds of children playing, horse-drawn carriages and a 'knocker-upper' fill the street. Walk down the street and take a peek inside any shops and houses, including a toy shop, chemist, grocers, a blacksmith and an artisan's cottage.

And so the scene is set and the story is now to be told...

In 1918, the families and shopkeepers have endured 4 years of war - constant worry for loved ones at the front, caring for those who have returned wounded from the trenches, enduring shortages and by mid 1918 coping with the threat of the 'Spanish Lady' influenza epidemic that was to kill over 50 million people worldwide.

Changes have come about in the form of new voting legislation, dramatically different opportunities for women, and men returning from a war that was unimaginable compared with the small world of the local streets they had previously inhabited. We see the start of changes in the strict class structures of the previous century and also in how women's roles are viewed.

The shops and houses of Lark Hill Place tell the story of this journey to Armistice Day on the 11th November 1918, when the end of the 'war to end all wars' finally comes to Salford. 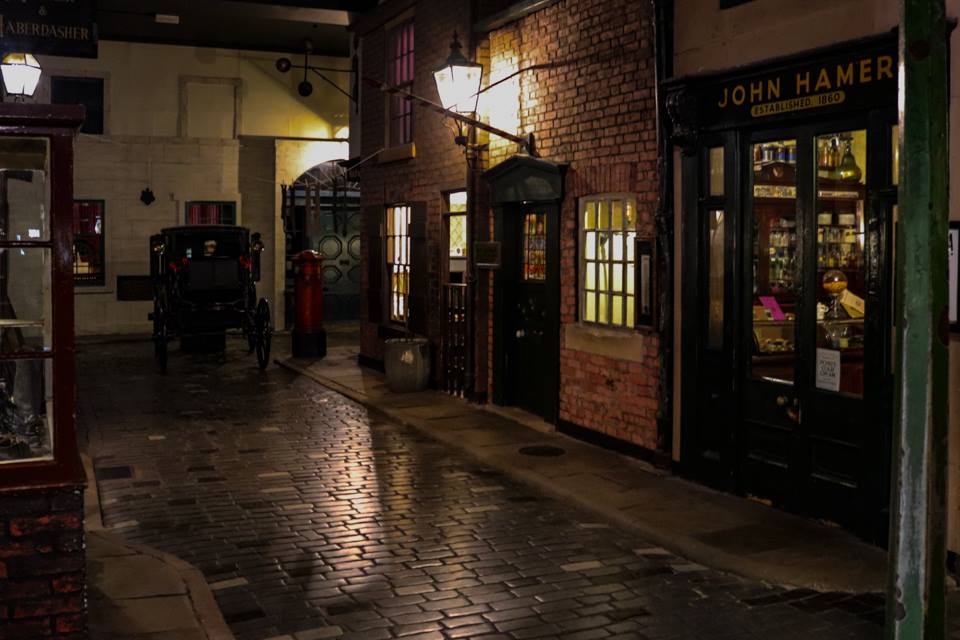 So this morning I was invited down to take a few snaps of the new exhibition, even more fortunate to eavesdrop as one of the guides talked a class of youngsters dressed in period clothing, through the story behind the street, which for me was the icing on the cake as I realised that I was witnessing yet another generation of Salford kids in the midsts of falling in love with that natty little Salford street, just as I did all those years ago.

I am not going to spoil things for the reader by posting photos of everything on display as it would take the fun out of finding them, however, I have included a good few photos within this article to get you going.

As we fast approach the end of another school half term, parents will be looking to find things to do to keep their kids entertained and I can not recommend a visit to the street enough. They can even immerse themselves greater by dressing up in period clothing so you can fire off a few snaps of them too. 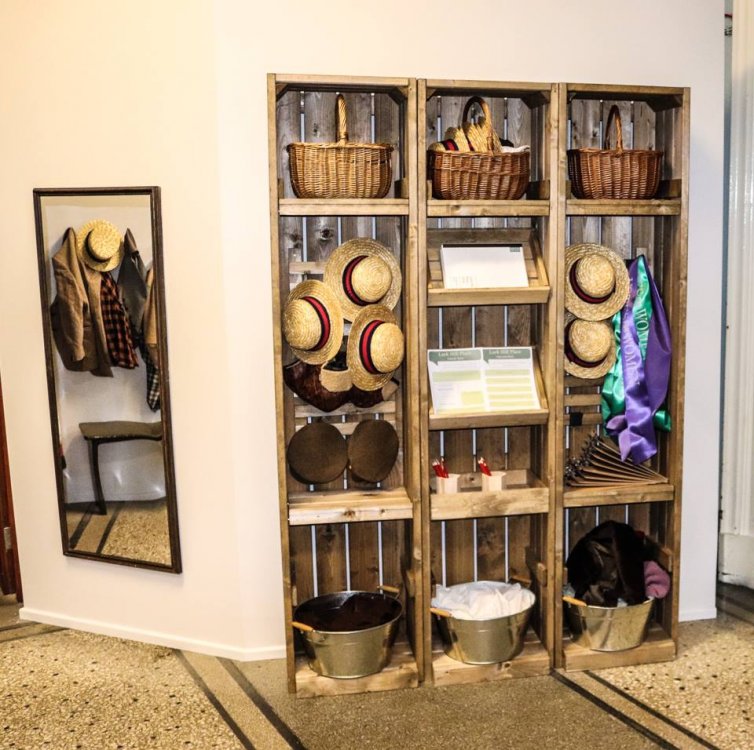 The new additions to the street fit perfectly within the telling of the story, they are dotted around the streets houses, shops and tavern and it is great fun tracking them all down. To name a few...

First Aid Case - There are two of these Boots first aid cases in the collection and one is still full of the original medical supplies! One case will go on display in the chemist and the other in our new medical office. Many families were sending items such as bandages and iodine to their loved ones on the front line. 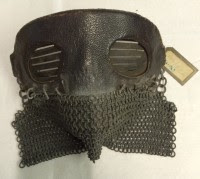 WW1 'Splatter Mask' - This 'splatter mask' was worn by tank crews in World War One to protect the face from flying fragments. Sight and breath must have been incredibly restricted from inside these masks. This item will be on display in the convalescence home where it will act as a soldier's memento. It will also serve as a startling juxtaposition amongst the rich decoration of the room and in doing so will remind us of the horrors that many of these soldiers faced before returning home.

Ostrich Feather Fans - These ostentatious feather fans can be found in the pawn shop to demonstrate that people were living more simply during this time. It was seen as incredibly unpatriotic to wear extravagant dress.

Photographs of Women in Work - With the men away at war, many women took up work in order to help with the war effort. Here we have some photographs from the collection of women in uniform. This would have been the first time that many women would have worn trousers and overalls, let alone gone out to work in a factory! 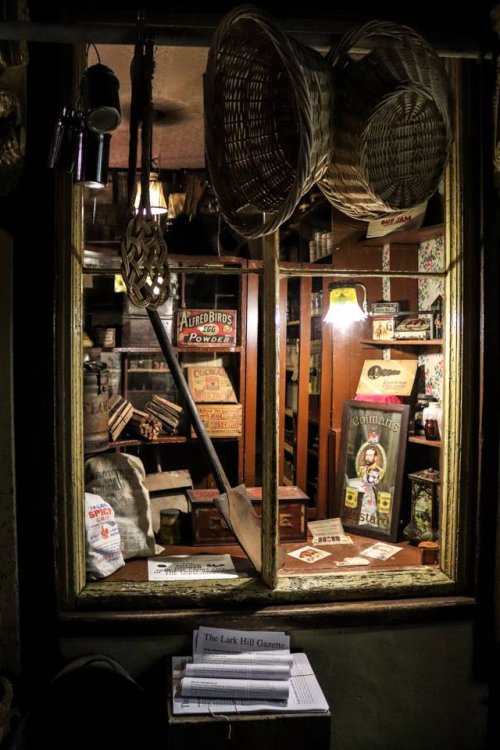 The old favourites are still there and my only regret is that the changes are for one year only as they bring a whole new chapter to the enduring story which is Lark Hill Place.

And just as you start to think it can not get any better than this, there is a fantastic little cafe serving, drinks and food, along with the fantastic art gallery thrown into the mix.

And even better still LHP and the Gallery are FREE. - (Parking - £2 for 3 hours)