100 YEARS AGO: SALFORD WOMAN GETS THE CHOP FOR THEFT OF BACON

The street planners certainly had a gallows sense of humour calling it Paradise Row, when the reality was that it was a hovel of terraced houses, with shared rooms, little hygiene and a communal outside toilet for all the residents.

Crime, drunkenness, violence, poverty and an early death were the accepted norm in Greengate for the poor, malnourished residents, any wonder that law and order was frequently broken.

One of the residents of Paradise Row was Ellen Brazell, who appeared at Salford Magistrates Court charged with the theft of a shoulder of bacon, valued at £3-2 shillings and eight pence.

Detective McDonald and P.C. Blakeley were on street patrol in Greengate when they saw Ellen sitting on a doorstep, looking slightly the worse for drink. 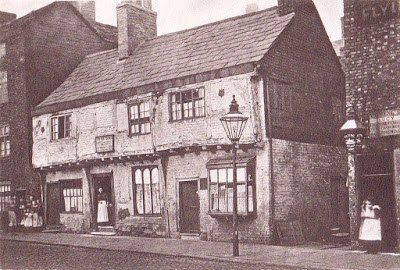 The boys in blue could'not help but notice  that she had something rather bulky hidden underneath her shawl, and when asked what it was, she replied, " Its nothing"

The police opened her shawl and found concealed in there a full shoulder of bacon weighing 40Ibs!, not something you would casually carry around with you.

Asked to account for the this "bonanza of bacon" this "glut of gammon" this " pulchritude of pork" - that's enough bacon puns, insert your own if you must - her answer was,

"A man who has just gone past into a nearby house, put it onto my knee and asked me to mind it"

Ellen was taken to the local court and remanded in custody for a week which seems a rather harsh sentence.

The following Saturday, Ellen was once again before the Magistrates, this time things would get worse for her.

James Williams the manager of a local grocery shop at 117 Greengate told the court that two shoulders of bacon had gone missing from outside his shop the previous Saturday.

Poor, Ellen took the stand and pleaded that, "I know nothing about the other piece" hardly the cleverest defence.

The Magistrate asked her if she had anything else to say in her defence, to which she replied,

"I am guilty, only for me having had a drop of drink it would not have happened. I am very sorry and leave myself in your hands"

That seems quite an honest admission of guilt with a plea for leniency thrown in, she had already served a week in the police cells.

D.C. McDonald then took to the stand and proceeded to put the proverbial trotter in, sorry boot, not trotter!

He told the Bench that Ellen did have a criminal record for theft and drunkenness and was no  stranger to the courts, what a swine!

Sadly this mixed bag of information cut no crackling with the Magistrate who sentenced her to one month's imprisonment - without hard labour.

You have to feel sympathy for Ellen who had already spent a week in remand and was now facing further imprisonment for  receiving the stolen bacon.

Imagine living in a slum like that and a windfall of food is dropped in your lap, well i know that I would be off like, Tom, Tom the Piper's son with my swag.