Further research and letters from a survivor of the sinking of the ship gave a completely different picture as to what had actually happened.

The S.S. Aragon was built in Ireland in 1905 and was the first of the Royal Mail Steam Packet Companys fleet that sailed between Southampton and South America.

In 1913 with the threat of war looming she became a defensively armed merchant ship and took part in the ill-fated Gallipoli campaign, helping evacuate troops from the Gallipoli peninsula in January 1916.

Fast forward to 30th December 1917 and the S.S. Aragon arrived at Alexandria laden with 2,700 troops bound for the conflict in Palestine, she lay some 10 miles outside the harbour awaiting a convoy to escort her into the harbour when disaster struck.

A German submarine the SM UC-34 torpedoed the ship hitting her port side on, causing extensive damage and causing the evacuation of the crew and passengers, hundreds of men were in the water fighting for their lives, when another torpedo hit the boat which ruptured its bunkers and spilt tons of thick, black bunker fuel into the sea,many men were drowned in the polluted waters, many more were overcome with fumes and also perished.

Help arrived when the HMS Attack drew alongside the sinking S.S. Aragon and managed to rescue crew members using ropes attached to the ship and the use of lifeboats which pulled the men onto the deck where they lay, semi-naked and covered in oil. 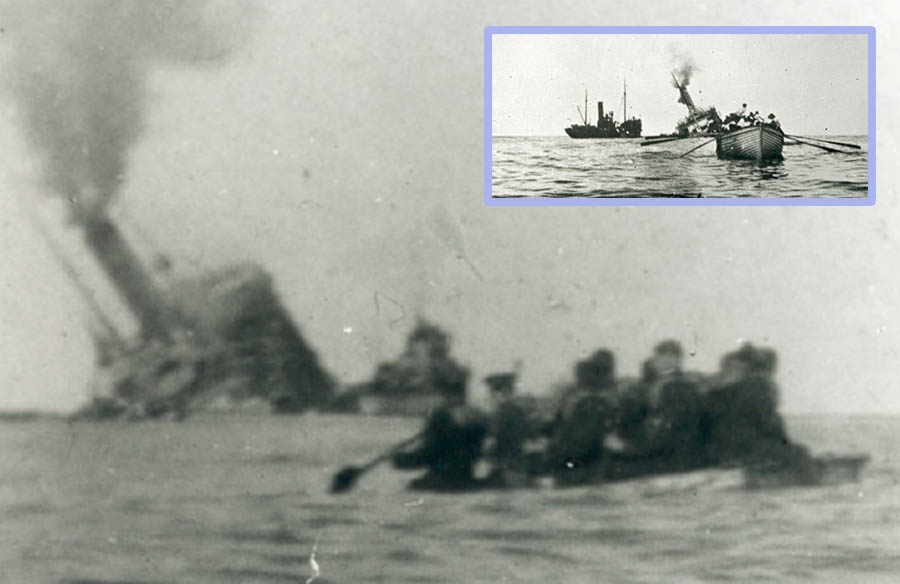 Suddenly another torpedo slammed into the HMS Attack, blowing her into two pieces causing her to sink within seven minutes throwing some 300 survivors of the S.S. Aragon back into the polluted, filthy waters where much more would drown.

In total 610 people from the S.S. Aragon were killed including the ships Master, Captain Bateman, six Voluntary Aid Nurses from the Red Cross and ironically enough Sergeant Ernest Horlock who had been awarded the Victoria Cross for 'conspicuous gallantry' on the Western Front in 1914.

Local trawlers and surviving lifeboats rescued the rest of the survivors and get them ashore to safety.

The Eccles and Patricroft Journal from February 1918 then published a letter, no doubt heavily censored from one of the survivors, Corporal D. Hirst aged 22, who lived at 246, Liverpool Road, Patricroft and it's worth quoting his memories of the event.

"I might as well tell you that we have had an eventful voyage and I managed to lose almost everything that I owned.

"To put it straight we were torpedoed, there were three of us from Patricroft on board, a boy called Matthews in the A.S.C.(Army Service Corps) and a Mr Firth, a cabinet maker who lived facing the Patricroft United Methodist Church and myself"

"I was sitting on deck reading my book when our ship was hit, the men were simply fine and each went to his post and not a man moved until he was told"

"After taking off my boots and tunic, I put on my lifebelt and went over the side of the sinking ship, on coming to the surface I looked around and swam away from the ship to avoid being sucked under when it went down"

"The water was quite warm and our lifebelts kept us afloat, a boy named Irving and myself kept together and after an hour in the water, we were picked up"

He makes it all sound so calm and well drilled when the boat went down, I can only imagine what it must have been like to be have been in that filthy, oily water and watch friends drown in front of you, unable to help, a horrendous ordeal for anybody and remember that Hirst was only aged 22, still a very young man.

I should imagine that his account was heavily censored to prevent him telling what had actually gone on in the water, and also to protect his family's feelings, basically to reassure them that he was OK and that things were not that bad.

A memorial to the people who were killed on the S.S. Aragon is commemorated on the Chatby Memorial in the Shatby district of Eastern Alexandria.

Oddly enough on the following day following the sinking of these two ships, just as the rescue operation for any survivors was called off the fleet auxiliary craft, HMS Osmmanieh also hit a mine in the rescue area, sinking her and taking with her 197 soldiers and nurses to a watery grave.