The Lakes Medical Practice was branded as inadequate by the Care Quality Commission and placed into special measures after a report found that they had failed to tell patients about concerns over the drugs they were taking.

A stark warning was given that the surgery could close altogether if changes aren't made quickly, although bosses at the surgery insist that they have already started to make positive improvements.

The report which was released this week after an inspection in January, highlights a number of issues, one of which includes a number of instances in which patients were not given the relevant information after concerns over a drug for which an alert was put out. 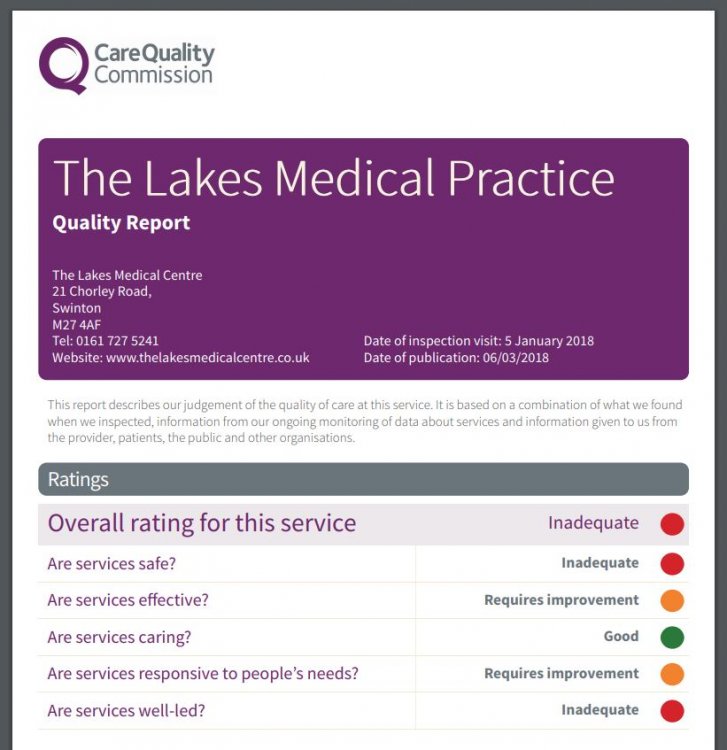 The CQC report says that failures to contact patients to discuss the alerts were made by staff, also finding that administration staff had not received 'any formal training in assessing patients'.

In an example they made note that a number of patients were refused appointments for illnesses such as chicken pox, instead, being referred to a pharmacist. Concerns were also raised regarding record keeping and safety checks which were undocumented and in some cases unrecorded.

There was some evidence observed of meetings taking place but they were infrequent with the last team meeting having being held in October 2017 at the time of the report.

Although clinical meetings were frequently being held they were found to have not been minuted and significant events that had happened in the intervening time which had not been discussed.

However, the surgery did manage to receive good status for caring and requires improvements in its effectiveness and its responses. Praise was also given to the staff who are said to have treated patients with compassion, kindness and respect and also taking into account the personal, cultural, social & religious needs of patients.

I am placing this service in special measures. Services placed in special measures will be inspected again within six months. If insufficient improvements have been made such that there remains a rating of inadequate for any population group, key question or overall, we will take action in line with our enforcement procedures to begin the process of preventing the provider from operating the service. This will lead to cancelling their registration or to varying the terms of their registration within six months if they do not improve.

The service will be kept under review and if needed could be escalated to urgent enforcement action. Where necessary, another inspection will be conducted within a further six months, and if there is not enough improvement we will move to close the service by adopting our proposal to remove this location or cancel the provider’s registration.

Special measures will give people who use the service the reassurance that the care they get should improve.

A spokesman for The Medical Practice said:

“We became aware a few months ago that a few of our older processes were letting us down, and we have since made really positive improvements and this has massively benefitted the practice. We are confident these changes will be reflected in the re-grading in a few months time.

“We have taken the report very seriously and as a practice strive to provide the highest quality of patient care.”