Salford's famous Red Devils have launched their new crest after they conducted consultation with the fans earlier in the summer. 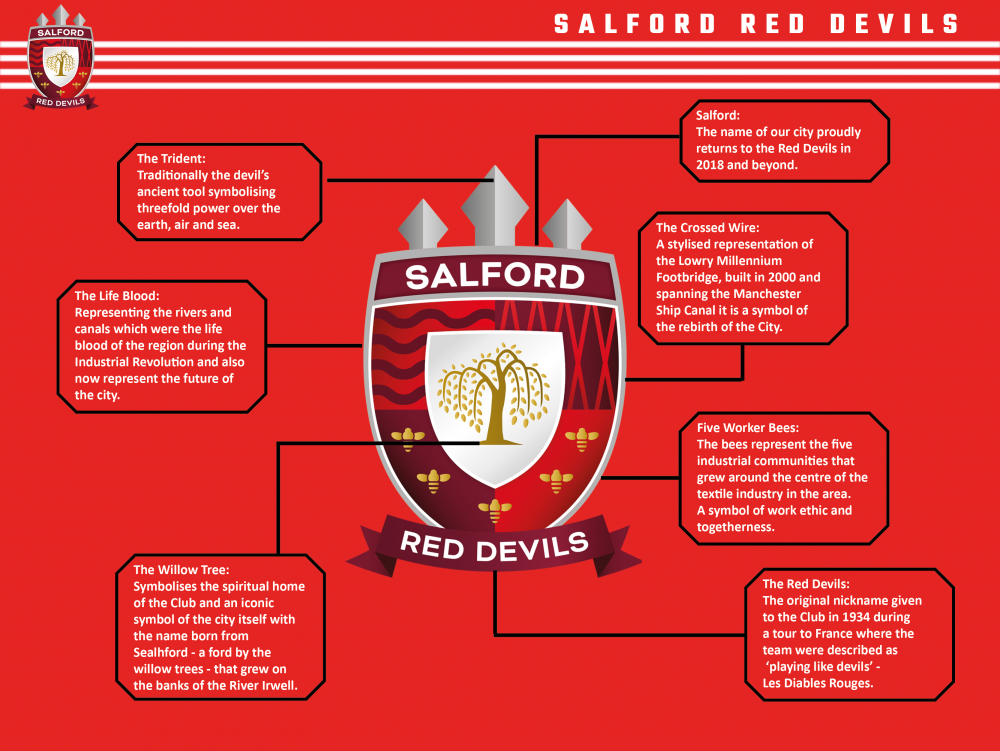 The club made the following announcement on their website and social media...

Today, not just the badge on the shirt changes but the whole ethos of what this famous old club is about.

Steeped in tradition and revered in history, the Red Devils has become one of the most talked about teams in the game and going forward from today the Club will embrace the ethic and attitude of this magnificent city of Salford.

Our new crest is the starting point. Born of many months’ intensive research and design, we went out to key stakeholders and asked what the Club and indeed their home city meant to them.

The answers were wide-ranging but always interweaving a thread between them was the pride in heritage – not just of Salford Red Devils, but the City of Salford itself.

Time and again, the same symbols and defining factors were brought up in the feedback –  The Willows, Salford Quays, the down-to-earth work ethic of those who live here. It seemed everybody we spoke to felt the same way. It became clearer than ever before that this could not just be about simply changing a logo.

In a way, given the depth of the research, ultimately the new crest would almost create itself and we are proud that, going forward, this historic Club will once again carry the name of Salford wherever we may play.

We are proud too that our city’s heritage and ethics will be worn with pride by our players – wherever they may come from in the world and we will make sure they know the significance of every aspect of playing for Salford Red Devils.

In recent months the symbol of the worker bee has been brought sharply into focus in our region for tragic reasons. The bees have formed a part of both Salford and Manchester heritage appearing on crests and coats of arms for many years but have risen to great prominence in 2017.

We are delighted that they will now form a key component of the new identify of Salford Red Devils. They signify that only with hard-work, togetherness and relentless endeavour we will achieve our aims.

Other focal points of our city also take pride of place – symbols signifying the city’s standing in the industrial revolution, its ability to produce stunning landmarks and of course the willow trees the city were founded around, will all stand out on the new crest.

We are Salford Red Devils and we are more than 13 players playing a game. We are a community entrenched in history. We are proud and we will continue to entertain and delight the generations that follow.

We cannot wait for the 2018 season to begin when we will take Salford into battle once again. We know you will be there by our side.

Earlier in the month Dr Marwan Koucash the clubs present owner announced that he was stepping aside and taking a back seat at the club, with plans being drawn up to replace the flamboyant millionaire with a trustee board at the Red Devils.

For a short time it was feared that the club was set to drop the Salford name altogether in a move to gain in more support from surrounding areas in Greater Manchester. But that was not to be after fans made sure their voices were heard by the club owner and staff.

It would seem that they have listened and learned from feedback and the new badge encapsulates both the club and the City almost perfectly. The only addition I would have made would have been to put two little devil horns coming out of the sides of it, but that is just me being picky.

We are also especially happy to see the worker bee being on the badge as lets face it, the symbol is as much a part of Salford as it is Manchester and it is synonymous with our busy industrial past, and now has a meaning that has a much deeper relevance in light of the tragedy of recent months. It now symbolises the hive of support given by the people, for the people.

In my opinion the new crest pretty much nails it, almost perfection I would say; and what's more it goes to show that the club is listening and understands the pride 'We' Salfordian's have in our great City, so let us remember that our local Rugby Club is part of that pride.

And so we wish them well in the coming season and we urge fans new and old to put this badge on their chests and wear it with pride, support our local team and get down to the AJ Bell, put bums on seats, shout our Cities name loud and clear and together lets #makesalfordgreatagain

So those are our opinions, let us know yours in the comments.